Haa valley is one of the most picturesque places in the Kingdom, spread over an area of 1706 sq. km. It is known as the valley of Guardian Spirit. The road stretches through the villages of Dogakha, Susana and Jabana composed of typical Bhutanese farmhouses along the way. You will see the spectacular view of Himalayan mountain peaks from Chilela pass. The Haa summer festival is a spirit uplifting celebration of traditional living-culture, nomadic lifestyles, unique Bhutanese cuisine, traditional sports and religious performances.

Fly into Paro by Drukair flight. After immigration and customs formalities, you will be received by the representative of Advent Bhutan Tours & Travels and driven to your hotel.

After checking into your hotel, you may have your delicious lunch and then visit the following:

The National Museum, housed in the Ta Dzong (watchtower). Ta Dzong- National Museum of Bhutan is a cultural museum in the town of Paro established in 1968. Built on top of the hill above Rinpung Dzong, it was originally used to defend Rinpung Dzong and the Paro valley during times of war.

Here, an intriguing collection of finest samples of Bhutanese art, including masterpieces of bronze statues, paintings, suitable galleries are elegantly displayed on scientific lines, which collectively will lead to the wonderful introduction to the rich culture and heritage of the Kingdom.March further down to Nyamai Zampa, a traditional cantilever bridge which lies below the sheer walls of  Rinpung Dzong. Stroll through Rimpung Bridge ( The oldest bridge in Bhutan)

Make a visit to a farmhouse which gives an insight of authentic lifestyle of a Bhutanese farming family.

In the evening walk around Paro downtown and you may visit local handicraft stores.

After breakfast travel to Haa. Haa valley is one of the most picturesque places in the Kingdom, spread over an area of 1706 sq. km.It is known as the valley of Guardian Spirit.The road stretches through the villages of Dogakha, Susuna and Jabana composed of typical Bhutanese farmhouses along the way.  you will be amazed by the beautiful ambience as you drive along the side of the mountain into the town of Haa. stop for a picnic lunch at Haa before nearing to Lhakhang Karpo (White Temple) and Lhakhang Nagpo (Black Temple). According to the myth, Buddha deities; Jamyang, Chana Dorji and Chenrizig(Jamyang, Chana Dorji and Chenrizig) helped construct the temple thus giving the name to Haa, meaning ‘surprise’.

In the evening explore the beautiful Haa Valley.

Dinner and overnight at a hotel in Haa.

After breakfast, you will go and witness the Haa Summer Festival.

You will get to watch very skilled local craftsmen weaving yak hair into their traditional tents, enjoy listening lively songs, dances and sports

overnight at one of the local farmhouses.

After breakfast travel to Thimphu.The road stretches through the villages of Dogakha, Susuna and Jabana composed of typical Bhutanese farmhouses along the way. on the way, visit one of the farmhouses to taste locally brewed liquor called Ara. Then, continue voyage onto Thimphu.Then pass through Chuzom, is the entrance to the Thimphu valley,  the Confluence of Paro and Thimphu rivers. The road passes along the Simtokha Dzong, (Dzong means ‘castle-monastery’) – It is the oldest Dzong built in 1629 by Zhabdrug Ngawang Namgyal (who unified Bhutan). The Dzong functions as a monastic and as well as administrative centre. Today, it is one of the pre-eminent Dzongkha language (National Language) learning institutes. you will reach the confluence of Thimphu and Paro rivers and finally to Thimphu valley.

On arrival at Thimphu check into your hotel and after lunch visit the following:

The School of Traditional Painting of Arts and Crafts – The traditional arts is known as zorigchusum (zo = the ability to make; rig = science or craft; chusum = thirteen). These traditional crafts depict hundreds of years of knowledge and ability that has been passed down through generations.The students undergo a six-year course to consummate learning the 13 traditional arts and crafts of Bhutan

Journey to Punakha, the old capital of Bhutan and presently the winter residence of the central monk body. It is also known as Pungtang Dewa chhenbi Phodrang (meaning “the palace of great happiness or bliss). It is the second oldest and largest dzong built in 1637 by Zhabdrung Ngawang Namgyal (Unifier of Bhutan) to serve as the religious and administrative seat of the region.

Afterwards, a drive to Wangdue (25 Minutes journey from Punakha). Visit Wangdue Dzong. It was founded by the Zhabdrung in 1638. In the 17th century, Wangdue played a critical role in unifying Shar Chog Khorlo Tsebgay (the western, central and southern regions of the country). It is one of the largest dzongkhags (districts) in the country covering 4,308 sq km and ranges from 800-5800 m in altitude. In 24 June 2012, the dzong caught fire and was burnt down.The renovation is still ongoing and is expected to continue until 2021.

After breakfast, Visit Khamsum Yuelley Namgyal Chorten(stupa),(also known as Nyizergang Chöten and Punakha Zangdopelri). It was built in 2004 by the Queen Mother Ashi Tshering Yangdon Wangchuck. The establishment of the stupa is to bring peace and firmness in the world. Enjoy the amazing view of Punakha and Wangdue valleys from there

Then travel to Thimphu with lunch en route. On arrival at Thimphu check into your hotel and visit the following:

The Memorial Chorten– Also known as the Thimphu Chorten, was built in 1974 to honor the third Druk Gyalpo, Jigme Dorji Wangchuck (1928–1972), who is regarded as “The Father of Modern Bhutan”.   Buddhist call the monument “The mind of the Buddha”. It is an honoured landmark in the city with its golden spires and bells, widely known as “the most visible religious landmark in Bhutan”.

After breakfast, travel to Paro. Drive to Satsam Chorten and then hike to the Taktshang, the Tiger’s Nest. Normally it takes about three and half hours to complete the hike but might take longer depending on your fitness.  Paro Taktsang, also known as the Tiger’s Nest, is an important  Buddhist sacred site which clings to the rock face, 900 metres above the valley floor.To the rear of the Taktsang lies Senge Samdup cave where Guru Rinpoche is said to have meditated for three years, three months, three weeks, three days and three hours in the 8th century. Today, Paro Taktsang is popularly known for the thirteen Taktsang or “tiger lair” caves in which he meditated..it is believed that Padmasambhava (Guru Rinpoche) flew to Taktshang from Tibet on the back of a tigress from Khenpajong. This place was consecrated to tame the Tiger demon. 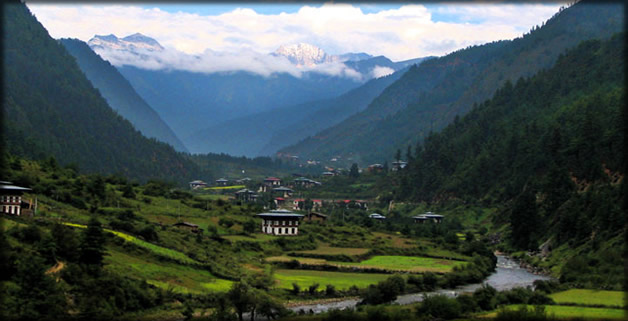