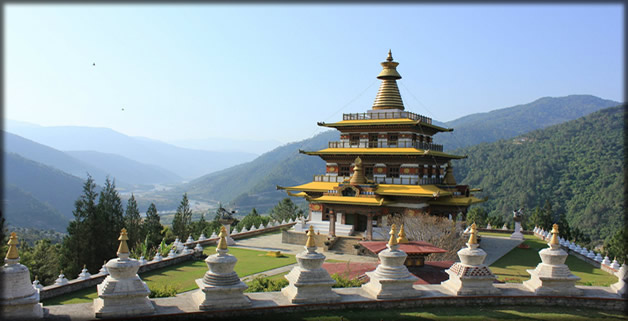 Check into the hotel in Paro. After brief rest and refreshment, you may start your mesmeric journey by first visiting the Farmhouse which offers a good glimpse into the Authentic lifestyle of Bhutanese farmers.  Lunch at a farmhouse.After lunch, visit the following places:

The Kichu temple – It is one of the 108 temples built in the 7th century by the Tibetan King Songsten Gampo. The Jowo Temple of Kyichu is one of the oldest temples in Bhutan. To overcome a giant demon who prevented the spread of Buddhism, laid on the whole area of Tibet and the Himalayas, King Songtsen Gampo build 108 temples placed on all the points of her body.

The Rinpung Dzong, a Buddhist monastery and fortress which houses the district Monastic Body and government administrative offices of Paro Dzongkhag, a fine example of Bhutanese historic architecture.  It was built in 1645 to defend the valley against Tibetan invaders. From the Dzong, march further down to Nyamai Zampa, a traditional cantilever bridge which lies below the sheer walls of  Rinpung Dzong. Stroll through Rimpung Bridge ( The oldest bridge in Bhutan)

In the evening stroll around Paro town.

Dinner & overnight at a hotel in Paro.

Day 02: Paro –Thimphu (2Hours-55Km) -Short Trekking to Tango Monastery (45Minutes from the base)

Travel to Thimphu, the capital city of Bhutan, an hourly drive journey.  The road runs down through the Paro valley, characterised by the narrow-gauged with high, rocky cliffs on the left. You can stop on the way to visit the magnificent Tamchhog Lhakhang, the hereditary place of worship for Bhutan’s iron bridge builder. Then passage through  Chuzom, is the entrance to the Thimphu valley,  the Confluence of Paro and Thimphu rivers. The road passes along the Simtokha Dzong, (Dzong means ‘castle-monastery’) – It is the oldest Dzong built in 1629 by Zhabdrug Ngawang Namgyal (who unified Bhutan). The Dzong functions as a monastic and as well as administrative centre. Today, it is one of the pre-eminent Dzongkha language (National Language) learning institutes.

After checking into your hotel visit the following:

The folk heritage museum– The museum was launched on 28 July 2001 under the initiative of founder Queen Mother Ashi Dorji Wangmo. The outdoor museum gives an insight into rural life.The museum exhibit diverse materials associated with the Bhutanese culture and way of life.The exhibition comprises of rural households’ artifacts, equipment, objects and tools.

After lunch, drive to the base camp of Tango Monastery and hike up to the Monastery. Tango is the highest centre of Buddhist learning for monks in the country. It is believed that almost every Je Khenpo (religious head of Bhutan) accomplished the 9-year program there. After completing that program, monks traditionally spend years meditating at the nearby Cheri Goemba retreat, built in 1619 by Zhabdrung Ngawang Namgyal(unifier of Bhutan).

Journey to Punakha, the old capital of Bhutan and presently the winter residence of the central monk body. It is also known as Pungtang Dewa chhenbi Phodrang (meaning “the palace of great happiness or bliss). It is the second oldest and largest dzong built in 1637 by Zhabdrung Ngawang Namgyal (Unifier of Bhutan) to serve as the religious and administrative seat of the region. Visit the Punakha Dzong, majestically sprawl between the Pho Chu (Male River) and the Mo Chu (Female River).

After breakfast, Voyage to Thimphu and after lunch visit the following places:

The Takin Preserve, which houses the national animal, Takin (The national animal of Bhutan). The reason for declaring Takin as the national animal is attributed to a legend of the animal’s creation (goat’s head and cattle’s body) in Bhutan in the 15th century by Lama Drukpa Kunley. Drive further to Sangaygang to get a bird’s eye view of the beautiful Thimphu Valley

Witness Archery game – the National sport of Bhutan at the Changlimithang National Stadium.

In the evening visit The Memorial Chorten– Also known as the Thimphu Chorten, was built in 1974 to honour the third Druk Gyalpo, Jigme Dorji Wangchuck (1928–1972), who is regarded as “The Father of Modern Bhutan”.   Buddhist call the monument “The mind of the Buddha”. It is an honoured landmark in the city with its golden spires and bells, widely known as “the most visible religious landmark in Bhutan”.

In the evening stroll around the Thimphu Town.

Travel to paro.Drive further  to Satsam Chorten and then hike to the Taktshang, the Tiger’s Nest. Normally it takes about three and half hours to complete the hike but might take longer depending on your fitness.  Paro Taktsang, also known as the Tiger’s Nest, is an important  Buddhist sacred site which clings to the rock face, 900 metres above the valley floor.To the rear of the Taktsang lies Senge Samdup cave where Guru Rinpoche is said to have meditated for three years, three months, three weeks, three days and three hours in the 8th century. Today, Paro Taktsang is popularly known for the thirteen Taktsang or “tiger lair” caves in which he meditated..it is believed that Padmasambhava (Guru Rinpoche) flew to Taktshang from Tibet on the back of a tigress from Khenpajong. This place was consecrated to tame the Tiger demon.

Drive further 18km up to the Drukgyel Dzong.The Dzong was built by Tenzin Drukdra in 1649 at the directive of  Zhabdrung Rinpoche, to honour victory over an invasion from Tibet during the 17th century.

In the evening,  visit a farmhouse which will give you a good insight into the authentic lifestyle of a Bhutanese. Soak in a traditional Bhutanese hot stone bath at a farmhouse. Dinner at Farmhouse. Overnight in Paro.

End of the Bhutan Tour