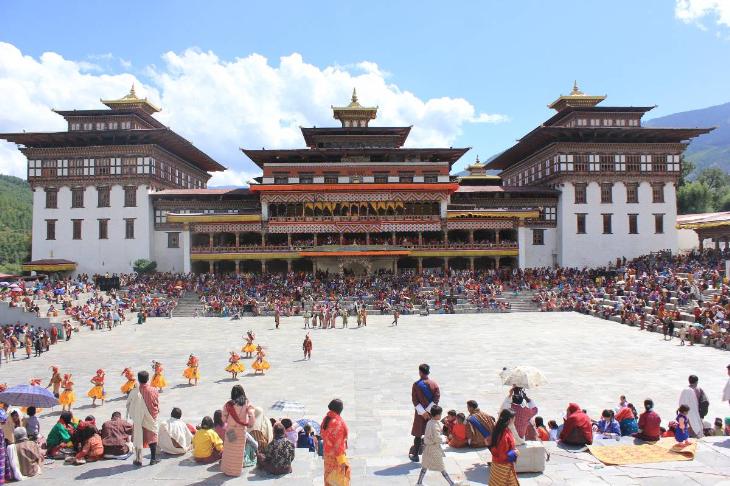 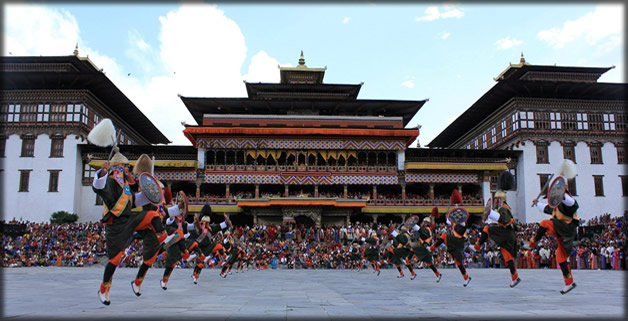 Thimphu Tshechu is held in Thimphu for 3 days beginning on the 10th day of the 8th month of lunar calendar.  The 4th Desi, Gyalse Tenzin Rabgay,  initiated Thimphu Tsechu in 1867. In 1950, the third King of Bhutan, Jigme Dorji Wangchuck (Father of Modern Bhutan) initiated small changes to Thimphu Tshechu.

Thimphu Drubchen is celebrated 3 days before the Thimphu Tshechu. It was first introduced by Kuenga Gyeltshen (reincarnation of Jampel Dorji, son of Zhabdrung Nawang Namgyel) in 1710.

During the Thimphu festival,  thousands of people from all over Bhutan gather, dressed in their finest clothing and jewellery and receive blessings and pray for health and happiness.

Thimphu Tshechu is held at Tendrel Thang ( Festival Ground in front of Tashichhoedzong).  Beautifully coloured mask dances and historical folk dances are performed during the festival.The sacred Thongdrol of Guru Rinpoche is unfurled early in the morning on the last day of Thimphu Tshechu. It is believed that the Thongdroel is unveiled at dawn to bring blessings to   all who view it

Arrive at Paro International Airport. After completing your immigration formalities, you will be warmly welcomed by the representative of Advent Bhutan Tours who will be your Bhutan tour guide throughout your entire travel in Bhutan.

On arrival at Thimphu check into your hotel and after brief rest and refreshment visit the following:

Then, stroll down the Handicrafts Emporium and local crafts shops, aligned neatly below Norzin Lam, opposite to Nehru Wangchuk Cultural Centre, to witness Bhutanese fine traditional arts. Here you can buy hand-woven textiles, thangka paintings, masks, ceramics, slate and wood carvings, jewellery, and other eye-catching items made from local materials.

After breakfast, you will go to witness the 1st Day of Thimphu Tshechu (Festival) .Thimphu Drubchen is celebrated 3 days before the Thimphu Tshechu. It was first introduced by Kuenga Gyeltshen( reincarnation of Jampel Dorji, son of Zhabdrung Nawang Namgyel) in 1710.

During the Thimphu festival, thousands of people from all over Bhutan gather, dressed in their finest clothing and jewellery and receive blessings and pray for health and happiness.

Thimphu Tshechu is held at Tendrel Thang (Festival Ground in front of Tashichhoedzong).  Beautifully coloured mask dances and historical folk dances are performed during the festival.

In between the ongoing festival, we will visit The Tashichhoe Dzong, It is a Buddhist monastery and fortress of the glorious religion on the northern edge of the city of Thimphu, built in 1641 by Zhabdrung Ngawang Namgyel. It was rebuilt into the present structure by the late King, His Majesty Jigme Dorji Wangchuck in the year 1962-1969. It houses the secretariat building, the throne room and the office of the king, and the central monk body.

After the festival you will visit the following:

And The National Memorial Chorten (stupa), Also known as the Thimphu Chorten, was built in 1974 to honour the third Druk Gyalpo, Jigme Dorji Wangchuck (1928–1972), who is regarded as “The Father of Modern Bhutan”.   Buddhist call the monument “The mind of the Buddha”. It is an honoured landmark in the city with its golden spires and bells, widely known as “the most visible religious landmark in Bhutan”.

Overnight at a hotel in Thimphu

After breakfast, the visit includes the following places:

Go to Tendrel Thang and witness about an hour, the 2nd Day of Thimphu Festival. Then, we will make a visit to the following places:

Simply Bhutan– It will give you fascinating insights into the Bhutanese unique culture and way of life.

After lunch , drive to the base camp of Tango Monastery and hike up to the Monastery. Tango is the highest centre of Buddhist learning for monks in the country. It is believed that almost every Je Khenpo (religious head of Bhutan) accomplished the 9-year program there. After completing that program, monks traditionally spend years meditating at the nearby Cheri Goemba retreat, built in 1619 by Zhabdrung Ngawang Namgyal(unifier of Bhutan).

After breakfast, we will go to the Tendrel Thang (festival ground) to attend the last day of Thimphu Tsechu. You will witness most religious mask dances, historical folk dances and dance of Bhutanese warriors.

After the festival, visit the following places:

Changankha Lhakhang (temple): This holy temple(spiritual home of children born in the Chang valley) was built by the illustrious Lam Phajo Dugom Zhigpo in the 13th century.

Journey to Punakha, the old capital of Bhutan and presently the winter residence of the central monk body. It is also known as Pungtang Dewa chhenbi Phodrang (meaning “the palace of great happiness or bliss). It is the second oldest and largest dzong built in 1637 by Zhabdrung Ngawang Namgyal (Unifier of Bhutan) to serve as the religious and administrative seat of the region. Visit the Punakha Dzong, majestically sprawl between the Pho Chu (Male River) and the Mo chu (Female River).

Later on, drive to Wangdue (25 Minutes journey from Punakha). Visit Wangdue Dzong. It was founded by the Zhabdrung in 1638. In the 17th century, Wangdue played a critical role in unifying Shar Chog Khorlo Tsebgay (the western, central and southern regions of the country). It is one of the largest dzongkhags (districts) in the country covering 4,308 sq km and ranges from 800-5800 m in altitude. In 24 June 2012, the dzong caught fire and was burnt down.The renovation is still ongoing and is expected to continue until 2021. 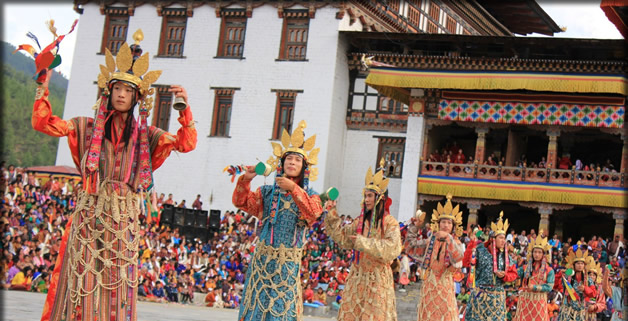 Then travel to Paro with lunch en route. On arrival at Paro visit

In the evening, visit a farmhouse which gives good insight into the authentic lifestyle of a Bhutanese. 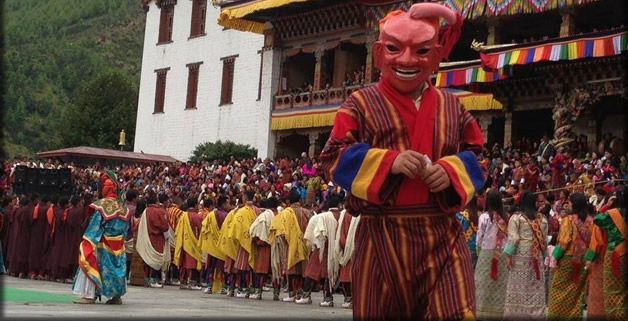 The above Bhutan tour package prices includes the following: